Andre Onana: Fifpro and Sebastien Bassong are the latest to support banned keeper

Onana and his Dutch club have both said they will be appealing against a year-long ban imposed on the Cameroon keeper by Uefa after he failed an out-of-competition doping test.

On Wednesday evening his Ajax team-mates showed their backing for the 24-year-old by wearing shirts with his name on before a cup tie against rivals PSV.

“Fifpro strongly believes the one-year sanction imposed on André Onana is excessive and disproportionate,” the union representing footballers around the world said in a statement.

“Fifpro cannot accept a system in which football players shown to have no intention of cheating continue to be stopped from practicing their profession for a prolonged period of time. Such sanctions not only affect their career but also their well-being.

“FIFPRO has previously called for a new approach to anti-doping regulations so that employee and employer organizations have more influence in how these rules apply to professional football.

“Furthermore, the notion that the player is not even allowed to train with the rest of the team is utterly incomprehensible.

“The rules need to urgently retract this additional injustice, which has no added value whatsoever and leads to the unnecessary isolation of a young professional football player.” 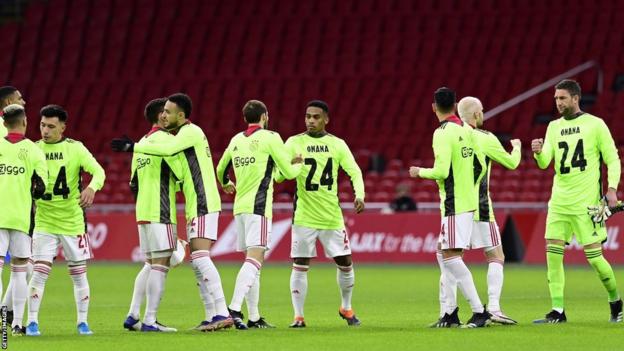 Former Tottenham Hotspur and Norwich defender Bassong, who played 18 times for Cameroon, is worried about how a ban may affect Onana’s career.

“I feel really sorry for him because he was really on his way in career and a year ban is going slow him down,” Bassong told BBC Sport.

“Even for his own mind it will be tough to recover from that but he is strong enough. I truly believe he didn’t do it on purpose, he’s not that type of guy.

“Hopefully the appeal (to CAS) will go through and they reduce the ban or cancel it.

“He’s young but really determined, he’s come a long way and he’s worked his way through.

“There’s a lot of things that need to be sorted out mentally, with the support of everyone around him, his club, the Cameroon federation hopefully he will pick it up after the ban.

“He’ll be 25 (when the ban ends) with a long career ahead of him and hopefully would still get the move that he’s been looking for.”

Bassong is also worried about the impact on the national team, when they host the Africa Cup of Nations next year, if Onana is forced to miss the tournament.

“Missing the Afcon is what worries me the most, we have all been waiting to host the tournament for years and years, it’s been rescheduled and put back and Andre will be a big miss for us,” he said.

“That’s why everyone is putting in effort to help him and get this ban overturned because for our nation it’s going to be a massive loss.

“If the decision gets confirmed he’d have to be away from any kind of football at all, he won’t be able to get close to any football premises, that will be the difficult part.

“He’ll feel that people are taking what he cherishes the most away from him. So hopefully he will get the support he needs.”

Onana has won 18 caps for Cameroon since 2016 and was the first-choice keeper for the Indomitable Lions at the 2019 Africa Cup of Nations in Egypt.

No Result
View All Result